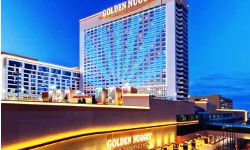 Nugget Atlantic City was opened in 1985 as Trump’s Castle, while in 1997 was renamed as Trump Marina. Golden Nugget Atlantic City is owned by Landry’s, Inc. (an American gaming, entertainment, multi-brand dining, and hospitality corporation, based in Houston, Texas), which bought the casino from Trump Entertainment Resorts in February 2011 (a hospitality and gaming company from Atlantic City, New Jersey, United States, which owns and operates the Trump Taj Mahal Hotel and Casino, closed in September 16, 2014, as well as the Trump Plaza Hotel and Casino, closed in October 10, 2016). In May 2011, Landry’s, Inc. took the full control of the Golden Nugget Atlantic City. 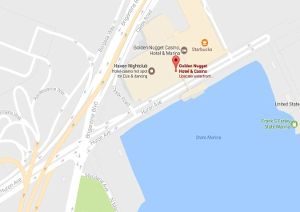 Golden Nugget Atlantic City was built between 1985 and 1997 by Hilton Hotels, and due to alleged ties to organized crime, the complex was sold to Donald Trump. In 1985 was opened as Trump’s Castle. In 1990, the Trump Castle took a sharp decline of revenues, due the newly opened sister property, Trump Taj Mahal. In June 1997, The Castle was renamed Trump Marina, but in May 2008, Trump Entertainment Resorts decided to sell the Trump Marina to New York-based Coastal Development (for $316 million). Later, in 23 May 2011, Landry’s Inc. purchased the property (for $38 million) and renamed it the Golden Nugget Atlantic City, coming with lot of renovations, until spring 2012. Golden Nugget Atlantic City has a property of 14.6 acres (5.9 ha), including a casino, 728 guest rooms, a nightclub, a 2000-seat ballroom, a 462-seat theater, seven restaurants (including Chart House, The Buffet, The Deck Bayfront Bar & Restaurant, or Lillie’s Asian Cuisine), a 16,920 sq. ft. (1,572 m2) recreation deck with a health spa, cabanas, tennis and basketball court, and many other facilities.

Golden Nugget is on the bottom side of Atlantic City, when it comes about the rankings in terms of revenue, having a small casino on the marina. It relies more on properties than on gaming side, and in 2014 it was up 40 percent over the previous year, while in 2015 it was up over 14.6 percent.

The hotel at Golden Nugget Atlantic City offers 728 rooms for its customers, and plenty of facilities, including an entertainment area, a recreation deck with a health spa, and an outdoor heated pool. Golden Nugget Atlantic City is a 4 stars hotel located in Atlantic City (Marina District), offering also a casino, a large marina area, different restaurants, and a special event center. You can search for available rooms and compare rates from multiple booking providers with one click accessing below button: