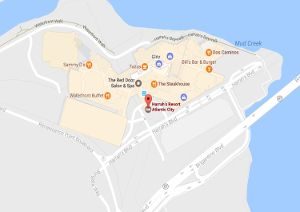 The History of Harrah’s Atlantic City

On Saturday November 22, 1980, Harrah’s was opened, with a hotel tower of 506 rooms, known as the Harbour Tower. A new tower, the Atrium Tower, was opened by Harrah’s, six years later, in 1986. In 1997, Harrah’s took a new expansion with the opening of the Marina Tower. The 25-story Bayview Tower was opened in 2002, along with many improvements and with the expansion of the gaming space.  Over the past years, Harrah’s has opened The Waterfront Tower (the second tallest building in Atlantic City, with 525 feet; also, at night, a variety of digital images are displayed on the entire surface of the tower) in 2008, including a new pool (which is located under a large glass dome, and is surrounded by palm trees and other plants) and spa (Elizabeth Arden Red Door Spa, consists of 23 treatment rooms, jacuzzi and sauna rooms). Harrah’s began with a new renovation in November 2016, including 450 Bayview rooms/suites. Harrah’s Atlantic City offers a variety of facilities, including fine dining restaurant (Dos Caminos, The Steakhouse), casual restaurants (Waterfront Buffet, Oshi Modern Asian Kitchen), different stores, and the Broadway by the Bay Theater (with 800-seat).

The hotel at Harrah’s Atlantic City offers almost 2590 rooms, being one of the top hotels from the Marina District. Harrah’s Atlantic City is a 4 stars hotel, and offers plenty of facilities, including a casino, a theater, different restaurants, a shopping area, and is located on Harrah’s Blvd, in Atlantic City (Marina). You can search for available rooms and compare rates from multiple booking providers with one click accessing below button: